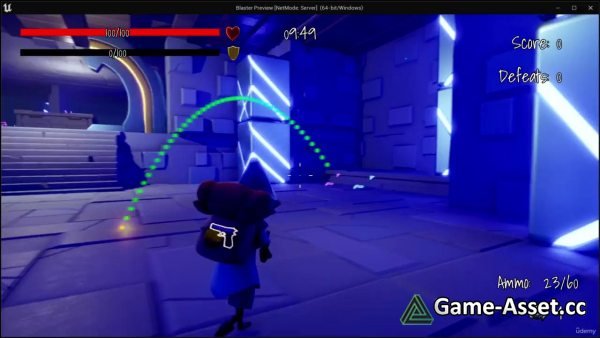 Requirements
C++ basic knowledge (variables, functions, pointers, classes)
At least some experience in Unreal Engine - creation of components, functions, and Blueprints (take one of my other courses!)

Description
**Over 50 hours of content - more is still being uploaded!**

Learn all about Unreal Engine multiplayer in this fully comprehensive C++ course. From scratch, we create a complete multiplayer shooter game, capable of creating and joining game sessions and connecting many players across the internet. We'll create our very own custom plugin that can be added to any Unreal Engine project to easily turn it into a multiplayer game.

We learn how to optimize our game for the best performance, as competitive shooters require the highest performance possible. We'll implement lag compensation techniques such as client-side prediction and server-side rewind, so the game performs smoothly even in the presence of high lag!

We learn how to use the proper game classes for each multiplayer mechanic. Custom match states, warmup/cooldown match timers, Elim announcements, HUD with health, shields, ammo and grenades, and more! We keep all important functionality on the server, to prevent cheating, and learn the proper way to use the Player Controller, Game Mode, Game State, Player State, Character and Game Instance classes.

After this course, you'll be able to create any multiplayer game you want. If you can do a fast-paced shooter well, you can do any game, because fast-paced, competitive games require the best performance possible.

Learn To Create An Online Multiplayer Game In Unity