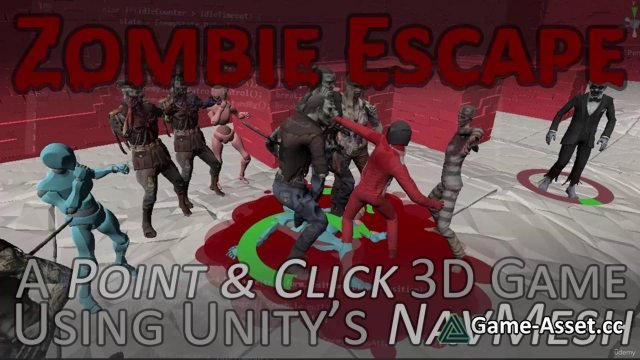 What you'll learn
Use Unity's NavMesh system for Player & Enemy Pathfinding
Randomly generate game levels and bake the NavMesh at runtime
Create a simple Finite State Machine in C# for organizing Enemy's AI
Design an entire game from start to finish
Health and Combat Systems, Keys and Doors, Breadcrumbs and much more!

We'll write a simple geomorphic-style procedural generator and then at runtime, once a new level has been created, we'll bake Unity's NavMesh Surface, allowing agents to take advantage of A* Pathfinding in a newly generated environment.

Learn how to properly configure NavMesh Agents to prevent them from getting stuck or walking through solid objects.

Learn how to use NavMesh Obstacles, Modifiers, Areas, Agent Types and more!

We'll use ScriptableObjects to help organize the game's resources for optimizing memory usage.

We'll write a Singleton script that will stay in memory at all times, allowing us to keep track of health, inventory, upgrades and so on while the game advances levels and changes scenes.

We'll follow all of that up by creating Health & Combat systems and making the game fully playable by the end of the course.

Who this course is for
Beginner to Intermediate Unity C# game developers who want to create a fully playable game while learning
Download links for «Zombie Escape: A Point & Click 3D Game using Unity's NavMesh»: