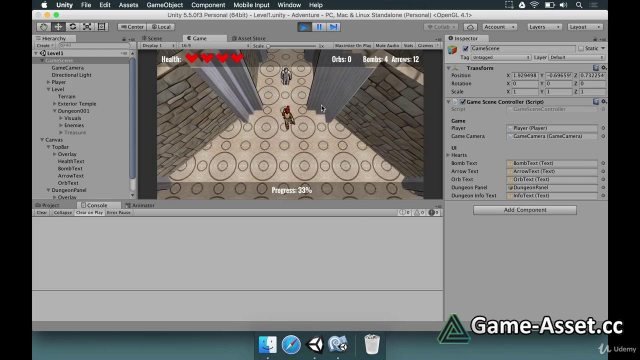 What you'll learn
Build a 3D "Legend of Zenda" game in Unity Technologies from scratch.
Navigate the Unity® and Blender interfaces
Build 3D models for the game in Blender.
Integrate the art from Blender into Unity®.
Build video game levels and scenes.
Code in Java and C#.
Build Android apps.

Requirements
To follow along with the Unity® part, you will need the following programs: Blender (for 3D modeling and texturing), Photoshop or a free program like Gimp (for 2D art and some texturing), and Unity® (for game set-up and coding).
The C# coding section might be overwhelming for someone who has never coded before. Some coding experience is recommended.
Some Blender experience for model creation. If you're a beginner, download the models and import into Unity.
Unity® and Blender are free to download. Please download and install Unity® and Blender before purchasing this course.
This course was recorded on a Mac computer, but you can use Unity® and Blender on a PC.
For the Android part, please have a working computer onto which you can install Android Studio 2.2.
Java coding skills are helpful but not required.
Eclipse.

Description
"Incredibly essential for a beginner such as myself. I have attempted to figure out Unity on my own and was completely lost even with the system's free tutorials. This is giving me exactly what I need to know in a step-by-step explanation"

"It's really good so far, they are not making me paste lots of code like other tutorials which means I can learn." - Eivis T.

This beginner's course has 2 parts! In Part 1, you build a 3D Legend of Zenda game in Unity® and Blender. In Part 2, you learn Android app development by making apps from scratch.

This course is unique because we make both the code and the art for the game from scratch. We teach you the fundamentals of designing, coding, and modeling a 3D game.

First you design the game "The Legend of Zenda" and its functionality in Unity®. You learn how to code in C# and build video game levels.

Don't worry if you've never coded before. We start simple and add more to the game as the course goes on.

Build "The Legend Of Zenda" Game in Unity and Blender

Unity® is one of the most popular platforms in game development. You can use Unity® to build 2D and 3D games. Unity® is cross-platform, which means it is easy to use with other platforms.

Then you create the 3D models for the game in Blender. You build all the art assets for the game, including the characters, weapons, cannon, dungeon, and temple. You learn how to integrate your art from Blender into Unity®.

Blender, like Unity®, is a popular production suite that is free to download. Blender is a revolutionary tool for making 3D art digitally. With Blender, you can make art assets for games, like we do in this course.

Have you ever wanted to learn how to make Android apps? Chances are you have tried but haven't got anywhere. Sometimes the tutorials are either too basic or too complex. What you need is a pre-planned curriculum that shows you how to build apps.

Look no further because this course is the Number 1 course that will show you how to build apps for Android. Reach a ton of people with your amazing idea today.

Create a Game Environment with Blender and Unity 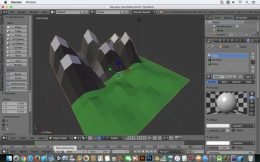 Make a Low Poly Scene In Blender and Unity in 30 Minutes!