All done with blueprints, all nodes have been well organized.
Almost all objects in the scene can be interacted.
Contains Graspable, Destructible, Draggable, Clickable objects.
Graspble objects can be grasped, released, thrown, rotated and have physical properties and drop sound to play with, you can customize the graps method to click or hold and initial distance, view and movement will be slowed down based on the mass of them.
Destructible objects can be grasped, thrown and broken into pieces.
Inspectable objects can be picked, put back, taken, rotated, zoomed, and observe with real-time dynamic depth of field, dialogue is available, details widget to show name and description or letter content.
Draggable double-swing door with drag and click interaction, it can be locked, dialogue and cutscene are available.
Draggable cupboard and drawer, similar to the draggable door, with all features the door have.
Draggable switch allows you to install the missing parts, drag or click to toggle, trigger lights or other objects, also with dialogue and cutscene.
Draggable switch with Graspable handle, you can break the switch by pulling down the handle, particle and sound effects will play when it’s broken.
Clickable button and switch, which can trigger lights, bomb, etc.
Dialogue system with Subtitles for Inspectable and Draggable objects, you can apply different dialogue waves to them and customize play method.
Draggable objects can trigger Cutscene, you can apply different cutscene sequences to enhence your gameplay.
Simple Inventory System, you can take Inspectable objects and deposite them, items can be stacked and will be shown on the screen.
Play footstep or drop sound based on the different surface type.
Flashlight with smooth rotation, which can illuminate the surroundings in a dark environment.
Day-Night system, which allows you to toggle between day and night in your game world.
Dynamic Head Bobbing simulation, camera will shake slightly when your character is walking, jumping or landing.
Built-in dynamic Input Hints system and Crosshair switching, icons will be switched according to different devices and interactions.
Save and Load system for level transition, player character and interactable objects, like transform, is locked, is taken, is on, etc.
Fully support gamepad. 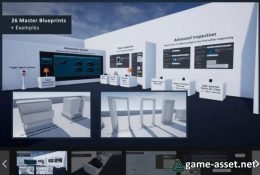 Pick Up Plus Inspect