Added a boss to kill with lasers : THE SUN. It chasing the player, throwing fireballs and various objects at him. He takes damage when in contact with a laser. He activates a shield to protect himself from lasers after being attacked. His shield is vulnerable to EMP bombs. Good luck to killing him.

[Improvement] Stop removing lasers, make updates is better ! The lasers are no longer deleted with each movement but are updated and created only in the event if a new reflection is detected (UpdateLaser function).
[Fix] Fixed a bug that caused damage to the player when behind a laser.
[Fix] The push lasers they don't turn off sometimes.
[Fix] Lasers duplicate due to streaming level.
The laser system is optimized to reset in case of unloading streaming.
[Fix] After a laser damages the player, it creates a second laser that is invisible to the naked eye but deals damage.
[Fix] The line by channel that modifies a laser after an impact ignores objects that move too slowly.
Added improvements for creations as well (CreateLaserV2 function).
Added clearer comments for laser creation functions.

[Improvement] New easier and more precise way to calculate reflections (createLaserV2 function).
[Fix] Lasers sometimes ignored reflections.
[Fix] The last laser bug in case it hits a reflecting wall but doesn't hit anything afterwards.
Adds the ability to reflect on an object that contains the "reflection" tag (in addition to the ability to reflect on a particular material).
[Fix] The last laser sometimes had no trigger.
[Fix] The last reflection sometimes ignores the wall.
UI (user interface).
Display the enemy's life/ first name and logo.
Display of a stopwatch to indicate the remaining time when a button with a delay is activated.
All controller / mouse and keyboard inputs available in the menu.
Mobile interface that allows you to control the player and activate their different abilities.
[Fix] Fixed text alignment in menu buttons (they weren't quite centered).
Added buttons for quit, restart, resume in the menu.

[Fix] Improve the buttons so that they stop crashing especially in level 2 with the falling cube.
New blueprint controller (Controler EventV2), Clean and optimized code.
New actor blueprint that rebuilds an indispensable item if it is destroyed.
[Fix] Buttons don't stop lasers sometimes.
Add button press animation.
Addition of dynamic parameters on the buttons such as customizing the sound emitted, the attenuation.
Added an event that changes the music at each stage.
Fix various button bugs.
Added new dynamic parameters and improved "platform_movement" blueprint actor.

New gameplay already configured for keyboard / gamepad and mobile.
Dodge added.
Run added.
Turret mode added (Allows you to move the aim without moving the player).
Weapon switcher with mouse wheel and controller pad or ui for mobile.
New code for character movements (very smooth and light code).
Improved player movement when hit.
The character contains several animations in blueprint of movements (when he bends).
Ability to move sideways in the air.
Display the number of ammunition (EMP).
Indicates when there is no more ammunition with an audible sound.

Blueprint spring cleaning (The code is tidied up, improved, optimized)

[Fix] Solve the problem with the sounds
New drum & bass music for the level 3 entirely invented and composed by our team.
Improved KillPlayer blueprint (Explosion particle and sound now appear at impact location)
New button sounds.
[Fix] The game music is duplicated if you uncheck the music box, close the menu, open it again and check the box again.
Improve the music set, if the music variable = the same as the current one then do not rewind the music and just add the new parameters.
Improved the way laser sounds and impact particles work.

The product has been tested and approved as functional for versions 4.16 to 4.27. 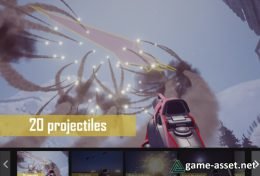 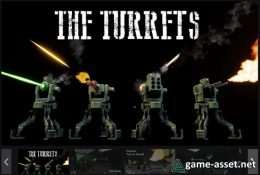 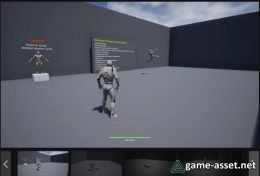